We will be closed for the holidays on the following dates:
December 24th - 28th, January 1st - 4th
more info

food.
from
more
than 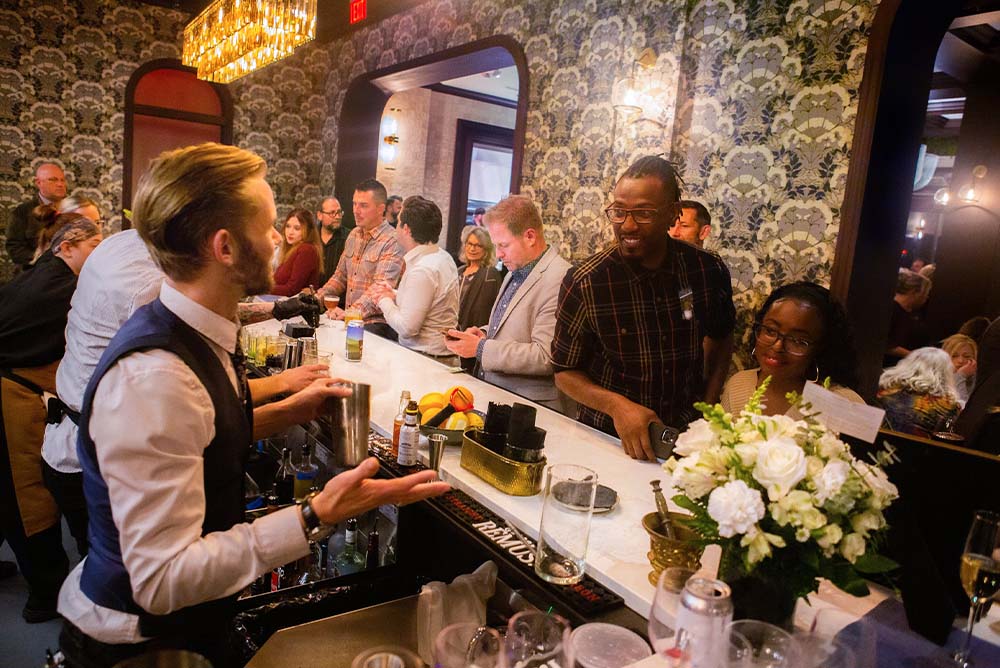 “Ordinary” had a different meaning in the American colonies. It’s what people called the town tavern, but was more than a bar. It was the center of community life. For us, that’s the vision behind the Graceful Ordinary. A place to enjoy good food with good friends, some of whom you’ve never met.

A HUSBAND AND WIFE TEAM

Chef Chris Curren is a veteran of Chicago’s restaurant scene who has worked with some of the most celebrated figures in the city’s culinary scene at venues such as Zealous, Fulton Market Kitchen, Seven Lions and his own Blue 13. Megan Curren brings her skills from a distinguished career in nightlife hospitality to create and manage unique and memorable events for our guests.

MORE THAN A MEAL

Chris and Megan compare the experience they want to create to a family meal. It’s so much more than the food. It’s a feeling of familiarity and comfort, special because everyone here cares.

Here, every plate carries a unique identity, created from multiple American regional styles and joined skillfully and artfully to surprise and delight but always feel authentic, like we would serve in our home. 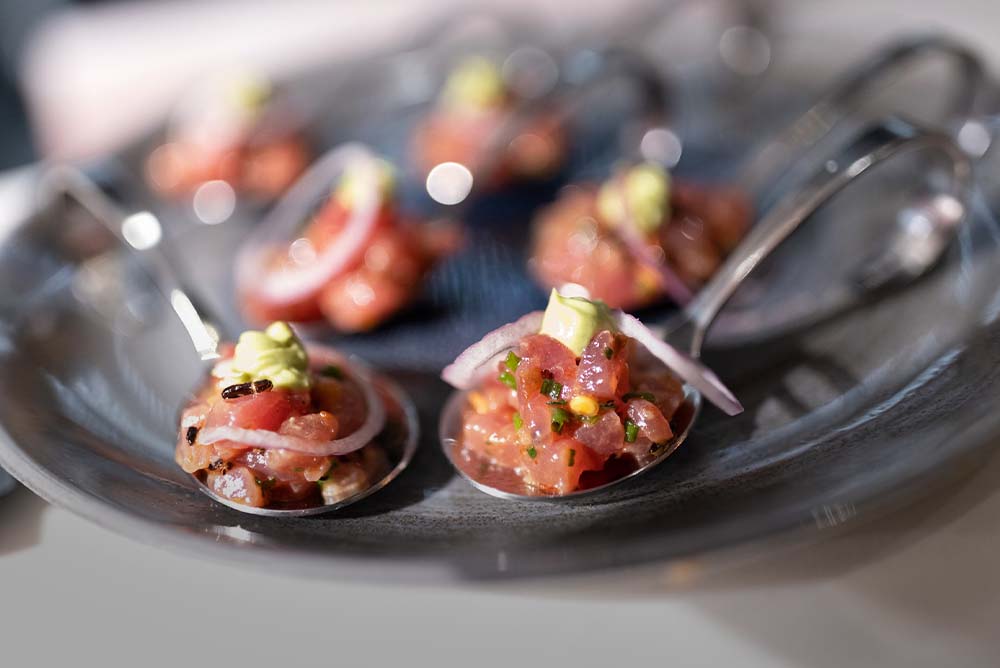 FRESH FROM THE HEARTH

Our concept centers on the hearth, cooked on a wood-burning fire. Every dish is seasonal because we use only the freshest ingredients, sourced from local purveyors and farmers.

LET US TAKE CARE OF YOU

We know that food is only part of a truly memorable experience. It’s about the space, beautiful and comfortable. Most important is service, and great service is the details, even the smallest ones. It’s about attitude, about putting our guests at the center of every single thing we do.

Join us. Let us take care of you. 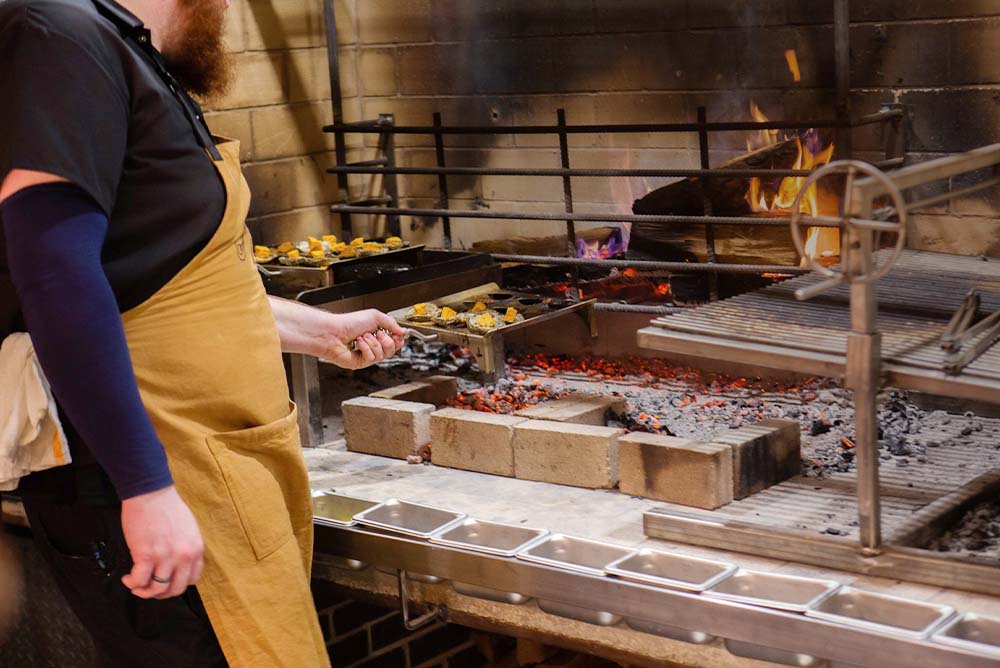 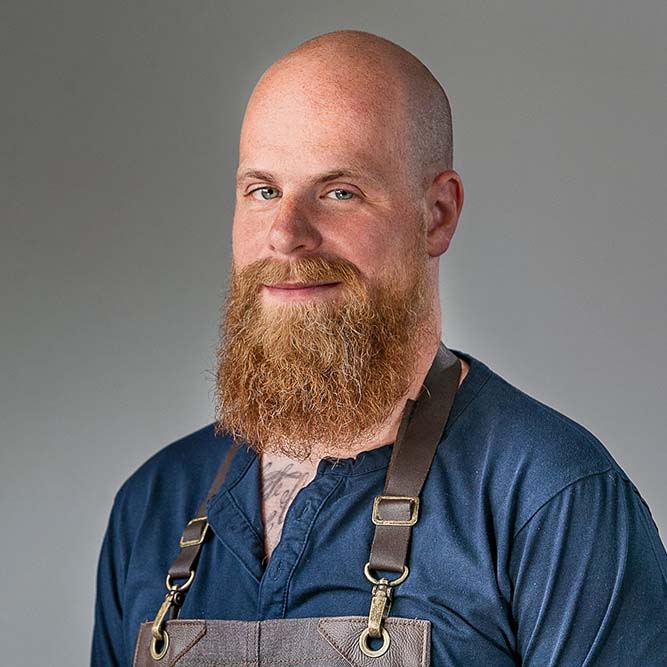 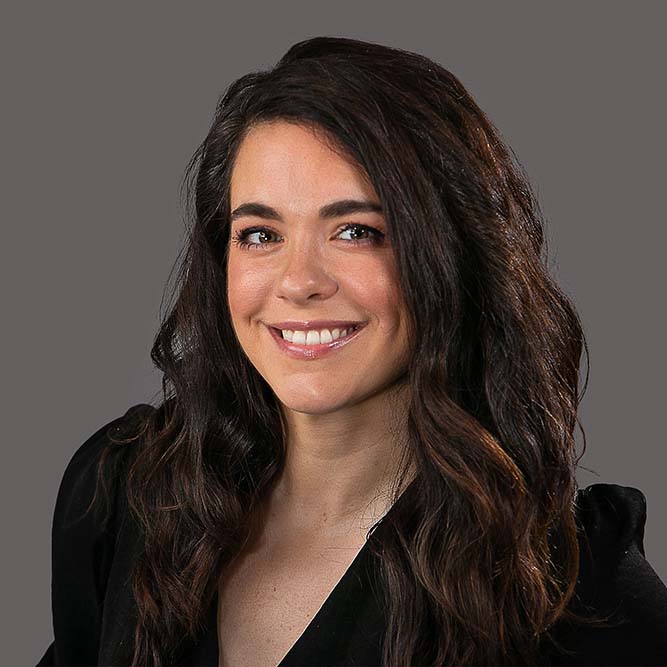 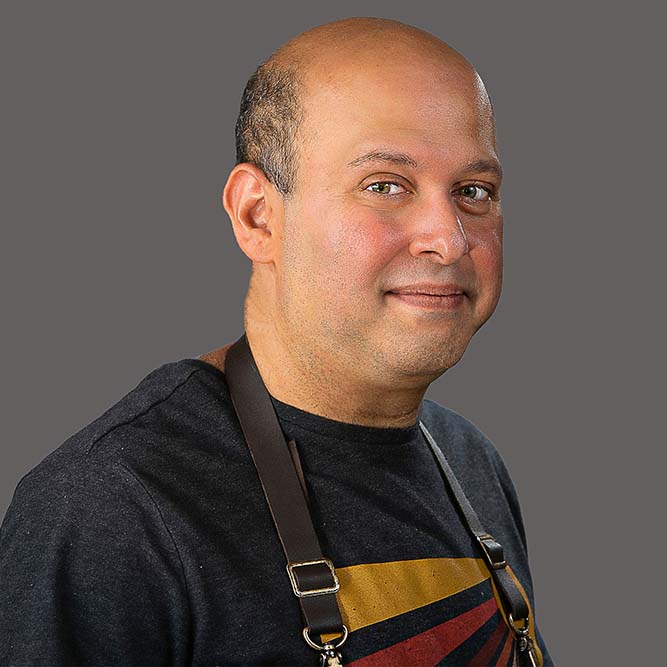 Being of Indian decent and growing up in Dubai Adel had little to no choice but to pursue the culinary arts. ‘ I’ve been fortunate enough to always be surrounded by the inherent honesty and goodness of a well plated dish. The rich lore of middle eastern food and the plethora of spices of Indian cuisine was my introduction to what good food should be . My father always cooked at home growing up and between the need to one day be just like him and my need to be the best at what I do I knew from a very young age that this industry was for me. ‘ Adel joined Boka in 2015 under the tutelage of top chef Stephanie Izard working at little goat and more recently her Peruvian concept cabra before moving to the south burbs. 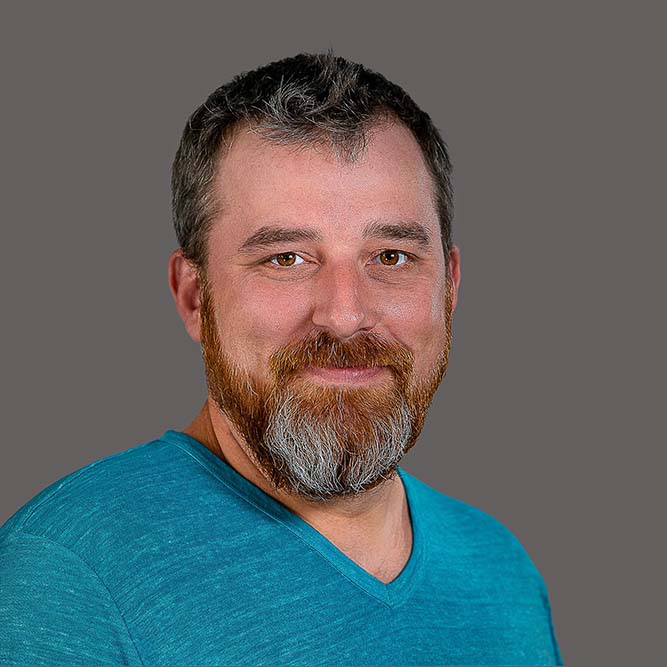 Adam Kappesser was born and raised in a small farming community of central Indiana. At the age of 15 he started his first job as a dishwasher in a family diner, from there moving into various roles at the restaurant. After high school in 2003 he decided to enroll into culinary school to follow now what has become his passion and main focus. Mainly staying in the Midwest after culinary working his way through restaurants in cities such as Louisville, Indianapolis, and Chicago. He has been a resident of Chicago now for the past 12 years and is “ Very excited to join the team at The Graceful Ordinary 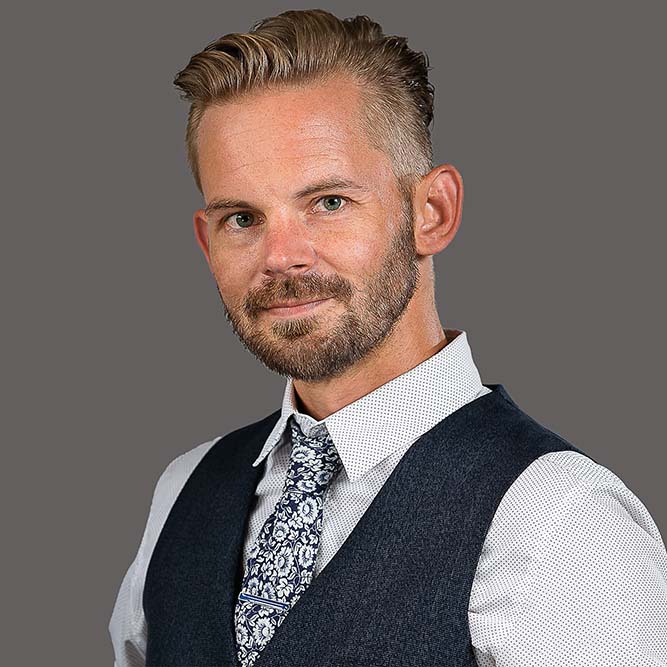 Hailing from just outside the Chicago metropolitan area in Illinois’ Fox Valley, Ryan Mish got his start in the hospitality industry at age 16 bussing tables at The Herrington Inn & Spa, an upscale boutique hotel in suburban Geneva. After spending several years holding various roles within the hotel’s food and beverage program, he enrolled in culinary classes at College of DuPage to explore his interest in cooking and landed a bartending job at nearby Tanna Farms Golf Club. Realizing his knack for guest interaction and front-of-house operations, Mish changed his educational path and graduated with an Associate of Applied Science in Hospitality Management in 2011. From here, he made the move to Chicago where he continued honing his skills behind the bar while working at popular downtown hotspots over the next decade including Texas de Brazil, Zed 451, the Virgin Hotel’s rooftop concept Cerise and the Adamus Lounge within the Silversmith Hotel. In 2021, Mish returned to his suburban roots to become bar manager of The Graceful Ordinary, the elevated American restaurant opening late summer in downtown St. Charles. At the helm of the riverfront eatery's beverage program, he focuses on curating an impressive collection of high-end whiskies and other sought-after spirits, creating inventive yet approachable cocktails and overseeing a diverse selection of locally brewed beers. 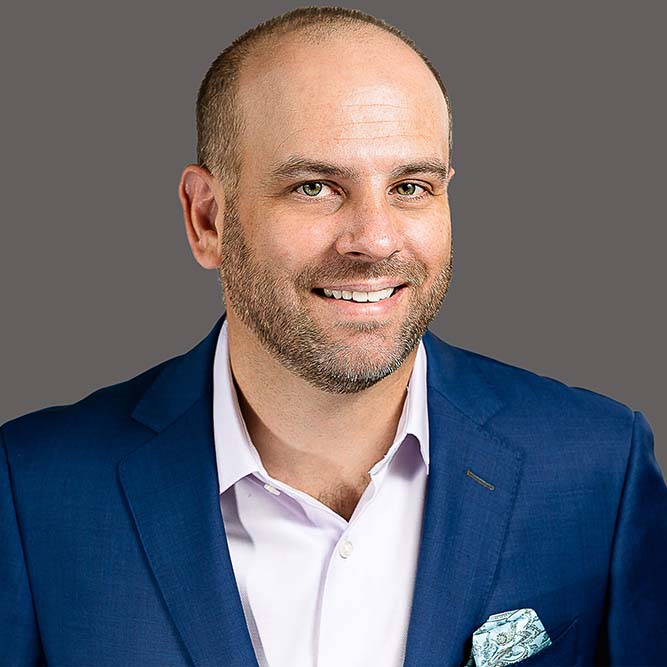 Alex was born and raised in St. Charles and started his post collegiate career as a construction project manager. After a few years, and a move to Chicago, he made a drastic career change and entered the restaurant industry as the GM of Hubbard Inn. After 10 years in the industry and 7 restaurant openings, Alex has come full circle and moved back home to St. Charles. His 8th restaurant opening at the Graceful Ordinary is the most exhilarating, being able to bring all he has learned in his career to the town he loves the most. 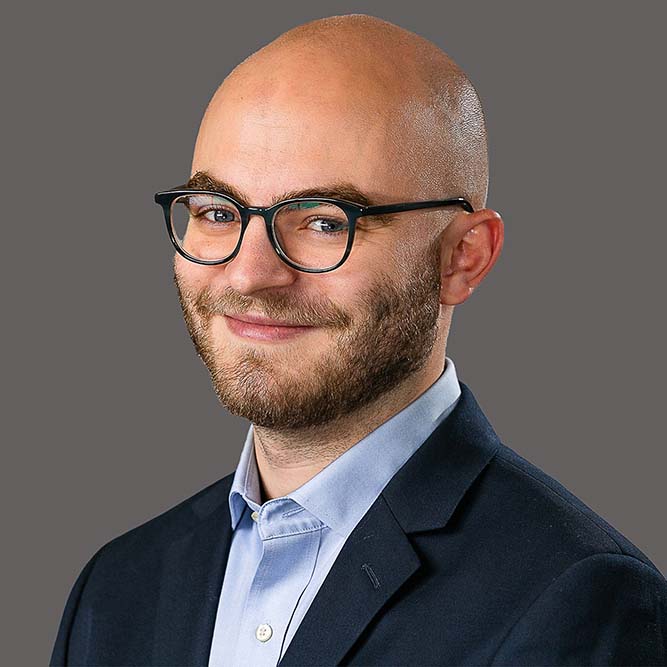 A lifelong native of the Chicago area's Fox Valley, Jack Sonin is excited to help enhance the area’s dining landscape through his role as wine director and assistant general manager of The Graceful Ordinary, the elevated riverfront concept opening late summer 2021 in downtown St. Charles, IL. Sonin took his first step onto the suburban dining scene in high school, working at popular Italian-American eatery Nick’s Pizza in nearby Elgin. In 2016, he assumed the role of server at Geneva’s eclectic wine bar Preservation, where he was immediately drawn to the energy and endless learning opportunities the industry provided. After developing a passion for wine, Sonin expanded his knowledge and credentials by earning his Introductory Sommelier Certificate from the Court of Master’s Sommeliers at the age of 21. He would go on to spend time at Fox Valley hotspots Pizzeria Neo and sustainable gastropub Hardware before relocating to Chicago and joining the team at Tied House, the music-forward restaurant attached to legendary concert venue Schubas, where he worked as a server and bartender. In 2018, he made the move to Kumiko (Food & Wine: “Best New Restaurants 2019”), the Japanese cocktail lounge and eatery by celebrated bartender Julia Momose and MICHELIN Starred Chef Noah Sandoval, holding various roles there and at the duo’s basement omakase concept, Kikko, before making the jump to Sandoval’s acclaimed fine-dining restaurant, Oriole. Now as wine director and assistant general manager of The Graceful Ordinary, Sonin carefully curates the upscale American tavern’s wine program, which showcases a thoughtful collection of new and old-world labels that complement Executive Chef/Owner Chris Curren’s menu of refined rustic cuisine. 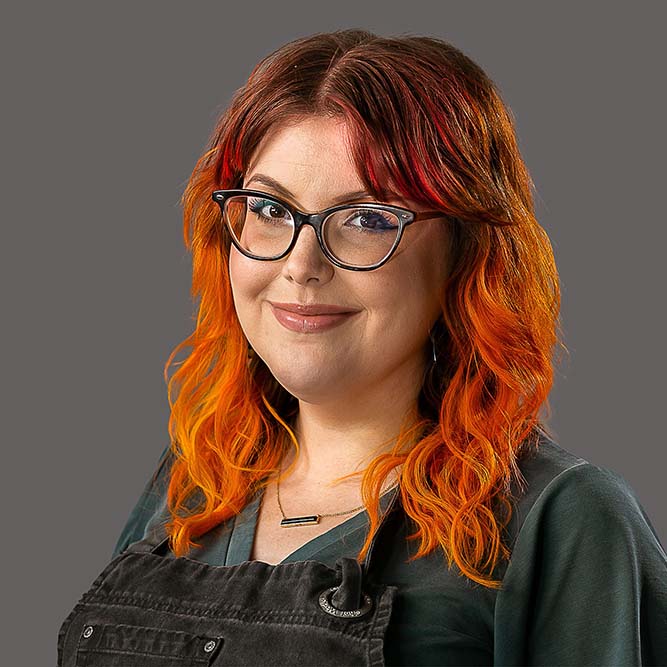 Born and raised in suburban Chicago’s Fox Valley, Pastry Chef Martina Preradovic brings a natural predisposition toward the creative and a local’s perspective to the culinary program of The Graceful Ordinary, the refined riverside restaurant opening in downtown St. Charles, IL this summer. Drawn to the hands-on nature of working in the culinary field, Preradovic held jobs in several of the area’s cafés and bakeries throughout her teenage years before pursuing a formal education at Elgin Community College, where she graduated with an Associate of Applied Science in Pastry Arts in 2014. After studying everything from yeast breads to decorative pastry, Preradovic continued to develop and refine her skills as assistant manager and pastry chef at Delicity Cakes in Roselle, IL, where she utilized her artistic talents to craft an array of custom baked goods and the bakery’s signature over-the-top sculpture sweets. In 2018, Preradovic assumed the role of manager at artistic coffee house Arabica Café in Elgin where she oversaw the shop’s front-of-house staff, catering program and daily bake-from-scratch production. Now, at the helm of the pastry program at the forthcoming chef-driven concept The Graceful Ordinary, Preradovic applies her keen understanding of baking and recipe development to create inventive yet approachable interpretations of comforting classic dessert dishes that mirror Executive Chef Chris Curren’s signature refined rustic style.